Z.H.P.: Unlosing Ranger vs Darkdeath Evilman was well-received on the PSP a dozen years ago. Therefore, it’s a shame that this port not only feels rushed but undercooked.

Z.H.P.: Unlosing Ranger vs Darkdeath Evilman returns as part of NIS’s Prinny Presents NIS Classics Vol. 2, letting a new generation play through the title that was originally released in 2010 for the PlayStation Portable. The game combines Mystery Dungeon-style dungeon-crawling with the number crunching and power curve of typical Disgaea titles. The story focuses on the hero, the Unlosing Ranger, and his quest to become strong enough to take down Darkdeath Evilman. Along the way, he helps the citizens of Earth and earns their confidence, which further empowers the Unlosing Ranger in his quest to save the day.

The story begins when the Darkdeath Evilman appears on the scene, threatening to conquer Earth. The original Unlosing Ranger rushes out of his house, late for his appointment to save everyone. Unfortunately, he meets an untimely end by rushing into oncoming traffic. A little-known stranger, the protagonist, happens to be walking by, and the dying ranger demands that he take over the mantle of The Unlosing Ranger. He does so and immediately goes to face off against Darkdeath Evilman, who easily defeats the inexperienced hero. Thankfully, the would-be savior does not die and is saved at the last minute and whisked away to a training facility for superheroes. While the staff helps him to get stronger, Super Baby holds the villain at bay. And thus, the real journey begins.

He cannot lose. It is literally in his name!

Z.H.P.: Unlosing Ranger vs Darkdeath Evilman certainly uses every zany trick in the book to make its story feel original and interesting. The hero trains on Bizarro Earth, a place that feels similar to Earth. In fact, every person on Earth has a counterpart on Bizarro Earth. By defeating monsters and assisting people on Bizarro Earth, the protagonist has a positive impact on his Earthling double / their Earthling doubles. The story keeps things light and humorous, though some may feel it is too over-the-top to fully get into.

Combat takes place in simultaneous turn-based mode. As players move their character or attack, the enemies take their turn immediately after. The ranger also has special moves, depending on the gear equipped. In true NIS fashion, the character can pick up an enemy which comes in handy when one needs space. Players always start each dungeon at level 1, and leveling up within a dungeon increases attributes by a percentage. The percentage rule is key as players have multiple ways to increase their base stats, thus allowing them overall growth, and like most Nippon Ichi Software titles, players can leverage mechanics to make their runs easier. For example, upon every death or dungeon completion, a count of total levels earned increases, boosting base stats in the process. Players can equip items on a grid to further boost attributes. With enough patience and investment in these systems, even later dungeons will not be too challenging. This provides a refreshing take on a subgenre known for its difficulty. 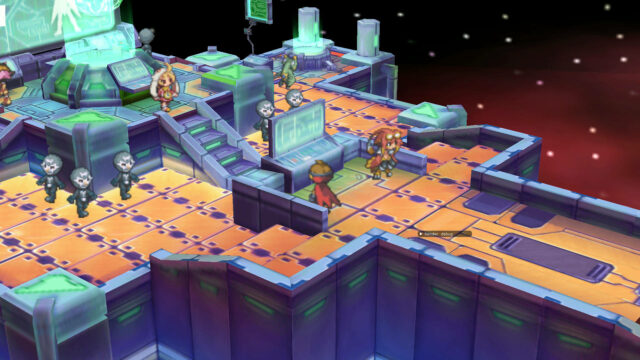 Unfortunately, the Nintendo Switch remaster has a few issues. First, while the 3D polygons run at a higher resolution, textures and 2D artwork do not. As such, they appear muddy and washed out. Games such as Final Fantasy Pixel Remastered demonstrated that 2D artwork can look great on modern hardware. By contrast, the pixelated graphics on Z.H.P.: Unlosing Ranger vs Darkdeath Evilman are a major disappointment, especially when the camera zooms in. Even hard-core retro gamers may find this distracting.

It’s even more concerning that the game crashes fairly often, about once an hour. Like most roguelites, Z.H.P.: Unlosing Ranger vs Darkdeath Evilman does not allow for interim saves when dungeon-crawling. Furthermore, if the program closes for any reason on a dungeon run, it counts them as dying in the labyrinth. Aside from lost levels (which do not get added to the running counter), the player loses all equipment found in the dungeon, plus any they took in with them. This random, yet somewhat frequent crashing makes it extremely difficult to progress through the game, especially as dungeons get longer.

Z.H.P.: Unlosing Ranger vs Darkdeath Evilman was well-received on the PSP a dozen years ago. Therefore, it’s a shame that this port not only feels rushed but undercooked, especially given its propensity to crash, though perhaps a patch will address this critical flaw. Given the first volume of remasters continues to suffer similar issues, it does not seem promising, and so it’s currently a case of buyer beware.

Disclosure: This article is based on a copy of the game provided by the publisher.

We use cookies on our website to give you the most relevant experience by remembering your preferences and repeat visits. By clicking “Accept All”, you consent to the use of ALL the cookies. However, you may visit "Cookie Settings" to provide a controlled consent.
Cookie SettingsAccept All
Manage consent

This website uses cookies to improve your experience while you navigate through the website. Out of these, the cookies that are categorized as necessary are stored on your browser as they are essential for the working of basic functionalities of the website. We also use third-party cookies that help us analyze and understand how you use this website. These cookies will be stored in your browser only with your consent. You also have the option to opt-out of these cookies. But opting out of some of these cookies may affect your browsing experience.
Necessary Always Enabled
Necessary cookies are absolutely essential for the website to function properly. These cookies ensure basic functionalities and security features of the website, anonymously.
Functional
Functional cookies help to perform certain functionalities like sharing the content of the website on social media platforms, collect feedbacks, and other third-party features.
Performance
Performance cookies are used to understand and analyze the key performance indexes of the website which helps in delivering a better user experience for the visitors.
Analytics
Analytical cookies are used to understand how visitors interact with the website. These cookies help provide information on metrics the number of visitors, bounce rate, traffic source, etc.
Advertisement
Advertisement cookies are used to provide visitors with relevant ads and marketing campaigns. These cookies track visitors across websites and collect information to provide customized ads.
Others
Other uncategorized cookies are those that are being analyzed and have not been classified into a category as yet.
SAVE & ACCEPT